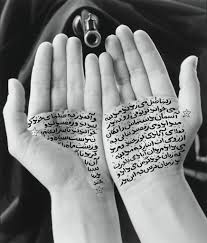 Shirin Neshat, Women of Allah series, Allegiance With Wakefulness and Guardians of Revolution, 1993-97

Shirin Neshat is a Persian artist, born in Iran. After her first trip to Iran after sixteen years of exile, she began her first series of photography reports: Unveiling and Women of Allah in which she reflects on the ideology of Islam and the plight of women in her country.

Some of the texts written in Farsi are verses and religious quotes from the Koran that refer to the duties and obligations of Muslim women to God but also to men, genuine patriarchs characterized by the opportunistic way they read the Koran. That’s why these quotes are used by the artist in a critical way to protest against the loss of rights in Iranian society. In terms of Iranian society in general, and women in particular. In her country, you cannot talk about rights, a little-spoken word, especially if one is born a woman.

In some photographs from Women of Allah, the calligraphed verses are texts by Forough Farrokhzad[3], an important woman in Iranian literature. She was the country’s first female poet to be publicly recognized and considered one of the bravest and transgressive writers in Iran’s new 20th century literature. Farrokhzad dared to write poems about her experiences, love, feelings and sex, creating a real challenge to the Iranian clergy.

“Poetry and calligraphy are innate in Iranian culture. I like poetry because it has the potential to be metaphorical, and for us Iranians, metaphorical language is essential. It has been used for many years and today it is used by artists and visual artists, because it provides the opportunity to “say what is forbidden to say” without being censored, and it allows you to make statements between lines in a country where we are forbidden from speaking out, especially women. That’s why it is logical that the halo of poetry is found in my work because it’s part of me, my personality and my culture. It’s part of my art and comes through easily when I’m creating. I like to count on Iranian poetry, because I know that it’s understood by my people. In terms of Farrokhzad’s poems, they are very necessary for my work for explaining my feelings and the character of my people. She was an amazing poet who wrote about forbidden things for a woman, like love or desire.[5]”